After 14 consecutive years of events, the annual Michigan State University Comics Forum will move to a triennial event because of an exciting partnership between Michigan State University (MSU) and the Comics Studies Society (CSS). Starting in 2022, the Comics Studies Society International Conference (an annual traveling conference) will be hosted at MSU every 3 years.

…and will repeat the same way as our schedule extends into future years:

Michigan State University Comics Studies is proud to welcome the Comics Studies Society International Conference to campus, continue our annual tradition of a major comics event, and give more comics scholars greater access to the many comics studies resources we have on campus, including our Special Collections Library, the largest public collection of comic books in the world.

Thank you to all attendees, artists, and scholars for your support over the past 14 years and moving ahead as we continue to forage new and additional spaces for comics studies at Michigan State University.

Thank you to all who attended, participated in, donated to, and helped program the 2021 MSU Comics Forum events last week. We have now archived many of the events associated with this year’s Forum, including

…as well as all of the academic panel discussions (currently listed on our Panel Discussions page).

We also appreciate all the support we’ve received for the past 14 consecutive years of events. Please see our latest annoucnement for how our annual events will take place moving into the future.

On behalf of the entire MSU Comics Forum Committee, thanks, again, for making the 2021 Michigan State University Comics Forum such a success! 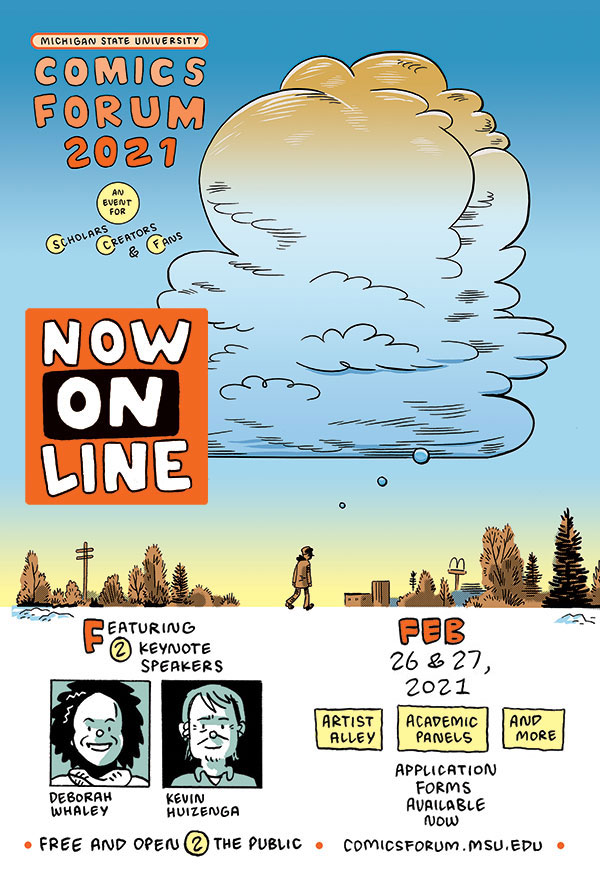 All events associated with the 2021 MSU Comics Forum will be broadcast on our YouTube Channel, here:

An overview of all our events are located on our SCHEDULE PAGE, with more granular listings on our Artist Alley and Panel Discussions pages.

We look forward to your participation in the 14th annual MSU Comics Forum on the final weekend of February 2021!

MSU Comic Forum friends and family: it is with a heavy heart we share the news of the passing of Michigan comic artist Nick Melanshek, and his six-year-old daughter Riley. Nick appeared in Artist Alley at the 2019 MSU Comics Forum, which was his first time doing so. Nick and Riley sadly lost their lives as the result of a car accident. Being a smaller, creator focused show means Comics Forum attendees and staff get to spend more time with artists, and we felt we needed to share this information. Nick is survived by his wife, Jessica, and there is a Go Fund Me page set up for her if anyone would like to contribute.   https://www.gofundme.com/f/m59-family-loss-riley-and-nick

In light of the global pandemic and resulting health and financial strain on many of our scholars, artists, and attendees, the 2021 MSU Comics Forum will be conducted online.  We are still accepting submissions from artists and scholars for our 2021 online event.  Scholarly panel discussions will be held via invited Zoom rooms, Artist Alley will take place in a virtual setting on our website, and our special guests will deliver their keynote addresses at their regularly scheduled times.  More information forthcoming as the event draws closer.  If you have any questions, please don’t hesitate to reach out to our staff via the contact page.

The 2020 MSU Comics Forum Keynote Addresses with Emil Ferris and Nick Sousanis are now available on our YouTube channel:

The events of the 2020 MSU Comics Forum started with an exhibition of comics from our Michigan State University Special Collections Library called “Comics and the City” which began in January 2020 and ran through the ending days of the Forum. The exhibiton was currated by Co-Panel Coordinators, Zack Kruse and Julian Chambliss.

On Tuesday, Feb 18th of the 2020 MSU Comics Forum, MSU Muslim Studies co-sponsored a lecture and comic book discussion on the comic, Yes, I’m Hot in This: The Hilarious Truth about Life in a Hijab, by Huda Fahmy.

On Friday, Feb 21, the academic panel discussions began to spill over into a second day this year (traditionally only held on Saturday of the event). The round table discussions started just after lunch and covered a number of topics such as, Comics in Translation, Comics and the Digital Humanities, and Comics and the Archive.

Later that evening, our 2020 MSU Comics Forum Creator Keynote Speaker, Emil Ferris, took the stage to deliver her lecture to a packed house.

The keynote address concluded with a question and answer period, but not before a standing ovation from the audience:

Throughout the day on Saturday, there was a whirlwind of activity in Artist Alley:

Concurrent to the Artist Alley, several sessions of academic panel discussions were taking place throughout the day.

At 1pm, all academic panel discussions stopped, save for the 2020 MSU Comics Forum Scholar Keynote Address from Nick Sousanis.

Nick spoke about his work in comics, using drawing as a mode of thinking, showed his process for creating innovative page layouts, as well as his pedagogical approach when teaching his comics courses at San Francisco State University.

After Nick Sousanis spoke to a packed room, the panel discussions and artist alley continued until the close of the day at 5:30pm.

In closing, the MSU Comics Forum Committee and I would like to thank the 2020 MSU Comics Forum sponsors for allowing all the events associated with the MSU Comics Forum to remain free and open to the public, the many comics artists and scholars who have helped create our most ambitious programming roster to date, the attendees who continue to tell their friends about the event and arrive open-minded and ready to experience new ideas, and our 2020 keynote speakers, Emil Ferris and Nick Sousanis, for being such thoughtful, intelligent, and gracious guests.

Finally, I would personally like to thank my dream team of committee members who not only help to make this show possible, but also help make it better every year; Zack Kruse, Julian Chamblis, James Curtis, Anthony Robinson, Jonah Magar, and Sherief AbouElSeoud, I couldn’t do this without you.

For those unable to attend the 2020 MSU Comics Forum this weekend, both keynote addresses will be liveStreamed. Here’s where you can tune in: